A Few (More) of My Favorite Things

In Christmases past, I’ve posted about some of the things that put me in the spirit of the season and the thing that turns me into a proper Grinch. (Think Dirty Santa.) This year, I’m sticking with the “nice” rather than the “naughty” in comprising my list. While these items might be a bit unusual, I’ve found them to be invaluable in sparking or enhancing my holiday mood.

1. Wire ribbon – Years ago, I embraced wire ribbon with open arms and admit I might go a little overboard with it. It makes decorating a snap for those of us who are digitally challenged. With wire ribbon, my bows are now flouncy and fabulous.
2. LED lights – I think it was Christmas 1987, when my mother, my aunt, and I loaded up the car with kids to pursue the time-honored tradition of looking at Christmas lights.  This was the early days of spectacular civic light displays, so we headed toward the extravaganza that had popped up just off the highway on the edge of town. We wound through acres of East Texas piney woods that had been transformed into a fantasy land. Thousands...nay, millions of lights twinkled and flashed, drawing oohs and aahs from even the adult passengers in the car. At the exit, my aunt voiced the horror that only people of a certain age can appreciate: “I wonder if these are the kind of lights that when one bulb goes out, they all do.”
I tell that story to reinforce how grateful I am for the advances made in the Christmas light industry. This year I purchased new strings of LED lights that are guaranteed to last ten years. TEN YEARS! Think of it! For ten years I don’t have to worry about putting up strings of lights, only to have the middle string go out two nights before Christmas.
3. Extension cords and three-way connectors – While we’re on the subject, anyone who has ever put up outside lights knows that that house-lighting scene in Christmas Vacation is really no laughing matter. Few tasks are as maddening in the season of peace and good will as getting strings and strings of lights properly connected. The job requires the patience of a saint. An electrical engineering degree comes in handy, too. This year, even with the few strings I put out, I faced a particularly challenging situation. I was able to solve it with an extra extension cord and a three-way connector. So far the house hasn’t burned down. Talk about a Christmas miracle.
4. Silver, gold, and white – I once had a pilates instructor (blonde and millennial) who claimed her favorite color was “shiny.” When it comes to Christmas, she and I are on the same page. And when it comes to shiny, nothing gives you more bang for your buck—or flash for your cash—than gold, silver, and white ornaments. Add some crystal icicles and glittered grapes, turn on the tree lights and Wham! The bling is blinding.
5. Wax warmers – Burning down the house with electrical cords and connectors isn't a huge concern of mine. Burning it down with a candle is. So while doing early Christmas shopping this year, I bought myself a gift—an electric wax warmer. With a fake tree and fake greenery, let’s just say the perfume of pungent pine never permeated my house. But this year—thanks to my wax warmer—the scintillating scent of cedar does. (I know. I get carried away with alliteration.) Let me add this one caveat: No matter how effective a wax warmer may be, it’s no match for steamed Brussels sprouts. Just sayin’.
6. Fairy lights – Yes, we’re back to lights again. My favorite southern writer, Rick Bragg insists that it’s “lights of color...that mean Christmas,” but he and I will just have to differ on this one. While I admit the intense hues of those trendy, new lights do create a giddy and gaudy glow, for me nothing creates a wonderland like white lights. And if they happen to be reflecting off snow, it’s a magical bonus.
Like I said, a rather strange list, but they truly are small things that have added to my enjoyment of the season. In summary and in the spirit of sharing, let me wish you... 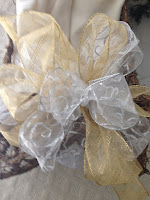 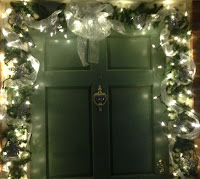 scents that remind you of a forested vale. 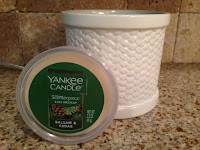 May the sparkle of Christmas be yours to discover
in twinkling lights... 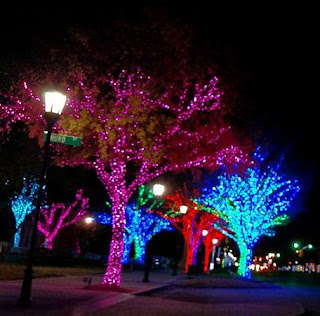 ...no matter the color.
Have a blessed Christmas!
Posted by Dee Dee at 3:57 PM