As a recipient of one of the first Barbies to strut off the Matel assembly line, I take personally any criticism directed toward the diva of dolls. I never quite understood all the feminist hoopla about the unrealistic expectations her body communicated to young girls. As far as I’m concerned, the takeaway from Barbie isn’t her shapely physique but her composure. We could all learn lessons about ladylike conduct from this icon of elegance.
I received my Barbie as a Christmas gift from cousins back East, who obviously were more in the loop than we Texans. I didn’t even know who or what Barbie was when I opened the box. In fact, I thought she was a little strange in her black and white zebra-striped swimsuit and her severe ponytail and frizzy bangs. But when I showed her to a friend—who was more in the loop than I, so maybe this was less Texan than Dee Dee cluelessness—I was quickly informed of Barbie’s royalty status in the doll kingdom. And I was also informed that there were certain expectations to be met when it came to Barbie’s upkeep.

﻿
﻿﻿﻿
My poor Barbie must have thought she’d been banished to fashion hell when she took up residence at our house. No matter how much I requested, argued, begged, whined, my Barbie never possessed more than three outfits—and that was counting the swimsuit. When I pleaded Barbie’s case to Mama, she unreasonably insisted she wasn’t about to spend more on a doll’s dress than she did on one of her own. So, for the time being, Barbie and I had to give up on the little gold and white brocade ensemble with the mink cuffs and matching mink hat. At the time, I think it retailed for around $15, which translates to roughly $15,000 in today’s economy. But my eleventh birthday was coming up, so I told Barbie not to disparage. ﻿﻿﻿﻿﻿﻿﻿﻿﻿﻿

I discreetly hinted to all my friends that being it was late January, Barbie was getting cold in her swimsuit and not having anything warm to wear (like a jacket with mink cuffs and matching hat) was endangering her health. My friends’ mothers were apparently as selfish as mine. They were no more willing than my mom to shell out big bucks for a killer outfit so that Barbie could have a fun night on the town. Only one friend’s mother came through. Thanks to her, my Barbie could add a red velvet and white satin strapless cocktail dress to her attire. Through research, I happened to know that was the chea least expensive of the Barbie ensembles, but Barbie and I weren’t in a position to quibble. I thanked my friend profusely, and we quickly adorned Barbie in her new “appropriate-for-any-occasion” outfit. While accessorizing her, we discovered that when we tucked the gold vinyl clutch under her arm, the gold finish rubbed off in her armpit. We labeled that residue “purse”peration, and laughed uncontrollably. Never one to take herself too seriously, Barbie didn’t resent our little joke at her expense. And her demure smile told us she appreciated our razor-sharp wit.
Barbie never complained, but in my heart I knew she was growing weary of her sparse wardrobe. I mean, there’s a limit to how many swimming and cocktail parties a doll can attend. Once again I encouraged Barbie to take heart. My grandmother was coming for a visit. I was sure she’d be happy to whip up a few items for her.
I had no doubt my grandmother would come to Barbie's and my aid. And I must say, she was willing. But she, like me just a few months before, had no earthly idea who or what a Barbie was. I think when she agreed to help me make some “doll clothes,” she envisioned stitching up a couple of baby doll gowns out of my old flannel pajamas. When she saw the curvaceous Barbie and the scrap of green taffeta I produced for the first outfit, she was at a loss for both words and ideas. But being the loving woman she was, she doggedly tackled the task. With her stubby, arthritic fingers, she took needle and thread in hand and, with teeny-tiny stitches, fashioned yet another lovely strapless cocktail dress for Barbie. When she finished, Barbie truly had a bespoke garment. The problem was it was not only sewn specifically for her, it was also sewn on her and could be removed only with scissors. The frock would be worn either one time or permanently.
At that point, Barbie and I had a heart-to-heart.
“Babs, ol’ girl,” I said. “I’m afraid you’re going to have to spend some time in this dress. Either that or go back to the red-and-white number until next Christmas when I can make another pitch for you a decent wardrobe.”
This is where I want those of you who think Barbie an unfit role model to read carefully. She never flinched. Her plump, ruby-red lips never quivered. Her eyes glistened, but not so much as one tear smudged her blue eye shadow and heavy mascara. She simply raised her right hand in that elegant beauty-pageant wave and without a scene slipped into her special shoe box still wearing that green taffeta dress. She wasn’t giving up, but she knew how to accept defeat gracefully and return to fight another day. What a doll.
Posted by Dee Dee at 5:04 PM 4 comments: 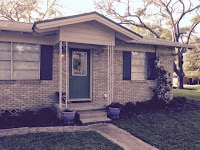 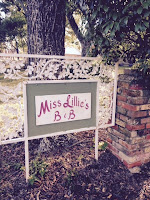 To her parents, older relatives, and friends, my mother’s oldest sibling was known as Lillie. Her younger brothers and sisters and, later, nieces and nephews simply called her “Sister.” Then she became “MeeMaw” to grandchildren, great grandchildren, and a horde of great nephews and nieces. But whatever name they called her, folks knew Sister’s door was always open and they were always welcomed at her table. So it is only fitting that some fifty years after she built her little ranch-style cottage, her granddaughter Janet and husband Ray would open it as Miss Lillie’s Bed and Breakfast, reviving the warmth and hospitality for which Sister’s home was so well known.
Every time I visit Miss Lillie’s, the writer in me sees the perfect spot for a writing retreat. Nestled among stately oak and pecan trees, the delightful bed and breakfast provides many restful spots for reflection and inspiration. Miss Lillie’s is also popular with guests who enjoy getting away for a few days of scrapbooking. Antiquers find Miss Lillie’s to be the perfect home base for their shopping expeditions. Located in the heart of East Texas, it is only forty miles from Canton with its famous First Monday Trades Day. But Canton doesn’t hold a monopoly on the antiques/collectibles market. The countryside surrounding Miss Lillie’s teems with all things vintage (and, yes, a fair amount of junk). The near-by Lindy Antique Mall, Janet and Ray’s other thriving enterprise, offers over 10,000 square feet of beautifully displayed reminders of days gone by.
This past weekend, as she often does, Janet offered Miss Lillie’s as a gathering place for a family mini-reunion. I’m always impressed by my cousin’s flair for decorating and her ability to evoke pleasant memories of or quiet longings for the past. After this last visit, I just had to share examples of her creativity. With her permission, I’m using twenty-first century technology to take readers on a virtual tour of “kinder, gentler” times. I hope you enjoy it. If you feel inspired, you might consider a retreat of your own at Miss Lillie’s. 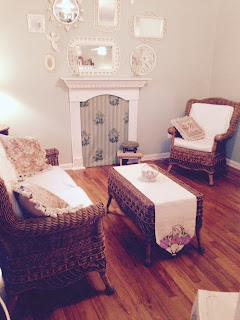 While some bed and breakfasts can be a bit overpowering with their nod to nostalgia, Miss Lillie's keeps things light and uncluttered. For scrapbookers, the furniture in this "parlor" is replaced with functional tables, allowing scrappers to pursue their craft, unencumbered and uninterrupted.


At Miss Lillie's you don't get just a "bed" and a "breakfast." You get an entire house with a well-equipped, spotless kitchen. 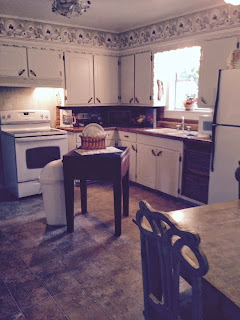 Both inside and out, comfy spots for reading, writing, and reflecting abound. 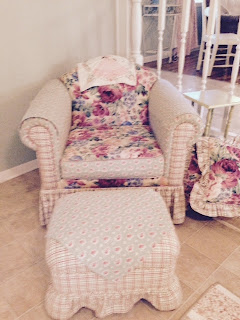 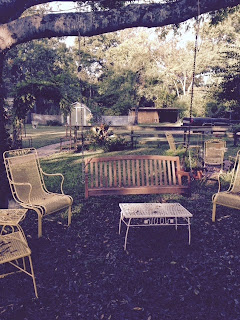 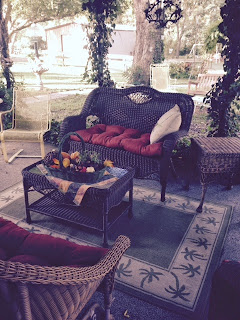 Vintage vignettes call out (unobtrusively) to be photographed. I wish my photography did justice to the details and the mint condition of this clothing. 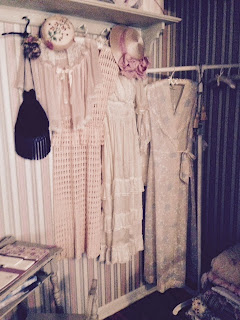 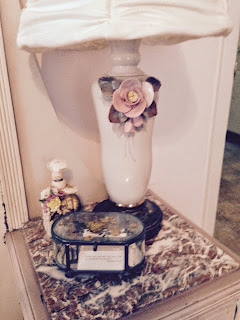 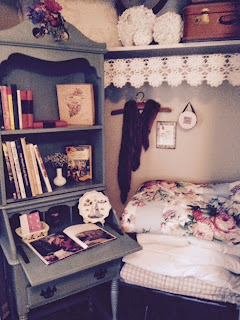 And for a bit of potty humor ... These lacy bloomers hang in the bathroom. Obviously the woman who wore these wasn't worried about adding "bulk" to her hips and thighs! 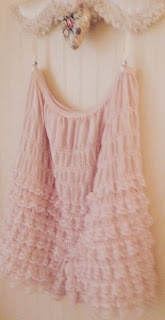 The serene charm continues outside. The brick in this pathway was salvaged from a demolished building and is over one hundred years old. 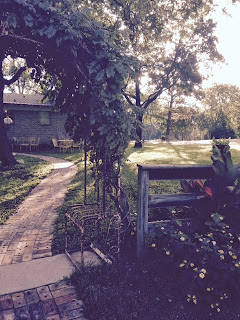 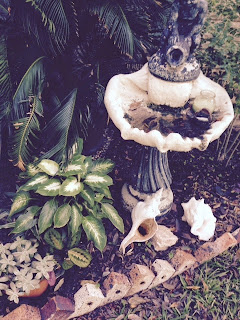 Sister loved to sit on her back porch and visit with family and friends while she shelled peas or pecans. Today, guests still gather there to talk and laugh. (If you want to shell peas or pecans, you'll have to bring your own.) 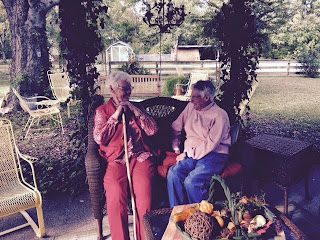 Like her MeeMaw, Janet Lindamood, proprietor of Miss Lillie's Bed and Breakfast, spares no effort in making sure her guests feel welcomed. 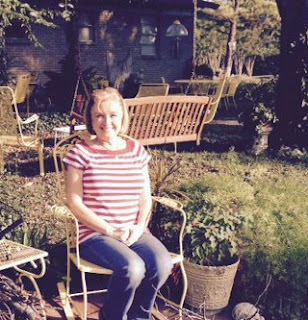