The title of this post isn’t completely true. I actually did have a poem that won second place at a recent writing conference. It just wasn’t the poem I thought would win—the one I really hoped would win. But this post is far from a complaint. It’s a celebration of what did win. And it’s chance to share the poem that “lost.”

I’m familiar with the person who judged the category for my poem. I know him to be an excellent poet and, more importantly, a kind person. I’m sure he had a difficult choice in selecting winners from over forty poems submitted by talented writers. And I’m sure the winning entries were deserving of those honors. I’m also sure that while my poem isn’t a winner, it isn’t a “loser,” either. In fact, it might be my favorite of all the pieces I’ve ever written.
Author StevenJames spoke one night at the conference about The Untouched Moment and how writers have the opportunity to capture moments that “resonate with truth.” Here’s the truth behind this poem: A picture of my grandson Brooks, taken by my daughter last spring, inspired it. I set it as the background on my computer desktop, and every time I looked at it, I smiled and thought there's a poem in there somewhere. Eventually, the poem surfaced. The picture takes me not just to the happy place Brooks was experiencing but to those magical times all children encounter through their imaginations. Those moments untouched by logic and reason and fear.

Last Christmas, I had the photo and the poem transferred onto a 5X7canvas and gave it to my daughter. She has it displayed in her living room. At the ripe old age of five, Brooks probably can’t appreciate this gift right now. But at some point in the future—maybe even after his Grammy Dee is gone—I hope he’ll look at the picture and read the poem and be transported back to a care-free, childhood moment. And I hope he’ll appreciate that his mother and his grandmother were able to capture it for him. 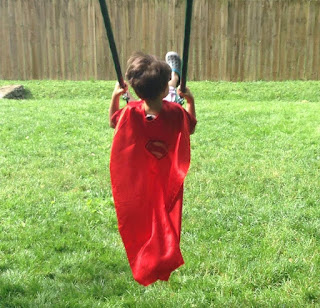 
Toes in gray Crocs
reach for the sky.
Shouts defy death,
“Push high! Push me high!”
No time to waste!
Evil must be subdued.
Wrongs must be righted,
justice pursued.


Gripping chains tight,
he chaos assails.
There are buildings collapsing,
trains off their rails!


What danger awaits--
what marvelous wonder--
this brave hero’s trek
through the endless, blue yonder?