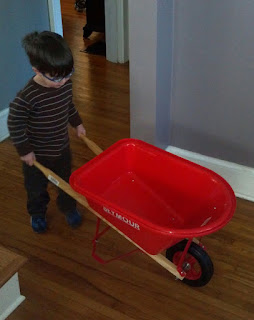 When I received this picture of Brooks, I immediately thought of the first lines of a William Carlos Williams poem, “So much depends upon a red wheelbarrow.” I guess in my career as an English teacher, I must have read or assigned this poem a dozen times. But to be honest, I never understood—truly understood—that first line until I saw this picture. Brooks might not able to verbalize his thoughts, but his expression tells me he definitely understands what Williams is saying. A red wheelbarrow doesn’t just carry dirt or tools or toys. A red wheelbarrow carries possibilities.
Another person who would have understood this poem was my dad, Joe Fink. As a young man of seventeen, he found his dream job. He joined the merchant marines and sailed off to see the world, albeit a world being ravaged by WWII. A few years later, it took a shipwreck to convince him that sailing was not the best occupation for a family man. He traded his seafaring for a job at a refinery along the Houston ship channel. Not the most glamorous or exciting of occupations, but steady work that would provide well for his family.
After twenty-five years at the same company, he retired. A hard worker all his life, he now had time to pursue another dream job—gardening. And he pursued it with gusto. In winter, he’d study the Farmer’s Almanac, deciding when and what to plant. The first hint of spring would draw him outside to prepare the soil by hauling dirt, manure, or compost--all in a wheelbarrow--all the while imagining the crops the contents of that wheelbarrow would yield.
I’m sure he didn’t work long hours tilling, planting, harvesting just to put food on the table. Quite honestly, it probably would have been cheaper for him to buy vegetables at the grocery store— although they wouldn’t have been as tasty and he couldn’t have shared them with friends and relatives. I think gardening attracted him because it provided a way to stay active and fit. And it gave him a sense of accomplishment, a sense of still being productive in his later years. Most of all, I think it gave him peace—a place and time to meditate, to connect with his Creator. Once, for Christmas, I gave him a little plaque for his garden which bore the following verse by Dorothy Frances Gurney: “The kiss of the sun for pardon, The song of the birds for mirth, One is nearer God’s heart in a Garden, Than anywhere else on Earth.” When he opened the gift and read it, he said, “You know, I really believe that.”
My dad passed away a few weeks ago. God, in His perfect timing, took him just as all quality of life was gone. But it was also perfect timing because it’s almost spring. Time to start a garden.
I’m no Bible scholar, but I do know that heaven is a place where our souls will be at their happiest, most content state. So with spring approaching, I like to think of my dad outside. He’s wearing a straw hat, some worn leather working boots, a pair of dark green coveralls that sag in the rear. Under a gentle morning sun, he’s headed toward his garden, pushing a wheelbarrow full of heavenly possibilities.