What the Heck is a Gimcrack?

I can’t say I’m taking my blog in a new direction because that would suggest I had a direction in the first place. In my post “Screamin’ and Kickin’,” I admitted I started a blog solely as promotion for my new book. And that was it. Once I’d created a couple of posts about my novel, I was stuck. I had some ideas, but I wasn’t sure they would appeal to my book’s target audience, young adults. I looked at a few blogs geared toward that age group, and the writers are all young and perky and cool and “with-it.”  In short, they are all the things I’m not. How could I compete with them?


Then I started taking note of the feedback on my novel. A lot of positive comments were coming from...shall we say... readers who don’t fit into young adult demographics. And then another interesting phenomenon occurred which reflected what I was hearing. An article in—dare I say it?—Modern Maturity magazine explained lots of adults were reading young adult literature. Because, as David Levithan, editorial director at Scholastic Press stated, “A good book is a good book.”
That’s when I became excited, and the title Gems and Gimcracks for Young Women of All Ages was born. I could gear my blog toward any woman with a young-at-heart attitude. I can be myself and write about things I know. And I don't have to sound like someone or something I’m not.
Now, about that word gimcrack...
The first time I came across it, I snickered like a middle-schooler. Even though the context indicated the word probably meant something like “a trifle” or “a trinket,” images formed in my mind—images associated with those one might find in a boys’ locker room. Now come on, admit it. You had the same thoughts, didn’t you?
The actual definition is “a showy object of little use or value.” To some, that might sound like a gimcrack is worthless junk—like those prizes we used to find in cereal boxes or Cracker Jacks. Or for those a bit younger, like the toys found in McDonald’s Happy Meals or the jewelry found in dollar stores.
But even with such a degrading definition, I don’t think of a gimcrack as worthless. Anything that makes me smile or brings at least a fleeting moment of pleasure can’t be completely without value. So in addition to sharing some  metaphorical gems, I’m going to use my blog to share a gimcrack from time to time. Maybe a lot of the time. Okay, probably most of the time. I thought about labeling each post as either "gem" or "gimcrack" but chose to let you decide for yourself. What might be a gem for me, might be a gimcrack for you. It might be a physical object, but it could also be a joke, a phrase, a thought, an anecdote...anything that brought a smile to my face or a lift to my day. Hopefully, it will bring the same to yours.
Share with me. What’s a favorite gimcrack of yours?
Posted by Dee Dee at 11:19 AM 3 comments:

I have a confession. When someone first proposed I write a blog, my immediate choice for a title was Screamin’ and Kickin’. That was the attitude I had toward it. With a gazillion blogs floating around in cyberspace, I wonder there hasn’t been some cataclysmic collision bringing internet traffic to a complete standstill. What could I say that hasn’t already been said and probably in a much more erudite or amusing way? But three reasons convinced me to stick my toe into that vast, never-ending ocean of blogs.

The first arose out of necessity: shameless self-promotion. A big part of being a writer—if you want your book read—is promoting it yourself. This applies whether you’re a New York Times best-selling author or a newbie selling books out of the trunk of your car (like me). And what people might not understand is that many writers are basically introverts. As a rule, we don’t make good salesmen. But with the invention of the computer and new innovations in publishing, millions—or more like billions—found a much easier way for their inner-authors to emerge. Competition skyrocketed, forcing writers to “self-promote" or perish. Platform became the new buzzword in the publishing market. An author without a “platform” is like a surgeon with missing fingers: success might be possible, but the odds aren’t good. And so my blog is my platform. Maybe a bit rickety right now, but I’m working on it.
Secondly, like most writers, I have thoughts swimming around in my head almost every waking hour. Digging in my flowerbed, walking the dog, cleaning house...ideas come to me. Sometimes when I wish they wouldn’t. Sometimes those waking hours creep far into the night.  Those ideas aren’t always brilliant or cutting edge, but still I’d like to share them, bounce them off a few people, get some feedback. So, I figured, maybe the idea of a blog wasn’t so far-fetched. Attracting readers, disciplining myself to update the blog regularly—those could be issues. But thinking of something to write about? Not a problem.
Finally, wise words from friend and relentless encourager Lisa urged me to “cross the Rubicon,” “just do it,” “write it and they will come.” (She didn’t bombard me with those clichés, but you get the idea.) She countered my argument of “who's going to read it?” with “that’s not your problem. Your job is to write it.” So that’s what I’m doing.
Please bear with me. I realize this is a LONG post. And I promise that in the future, they won’t all be about ME, ME, ME!  But I felt I needed something in the way of introduction/explanation before I completely dive into the new direction of my blog.

Email ThisBlogThis!Share to TwitterShare to FacebookShare to Pinterest
Labels: Screamin' and Kickin'

One of the issues I address in Beyond the Farthest Star is dating violence. This is an interesting and revealing interview on the topic.

Thanks to Dr. Lisa Marotta for directing me to this link!
Posted by Dee Dee at 6:46 AM 2 comments: 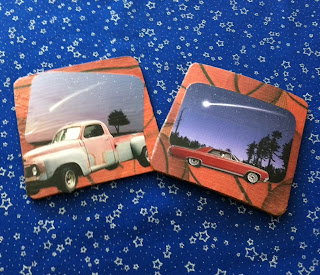 Exhibit A
My fellow Inkling Brandi Barnett insists she isn't "craftsy." I beg to differ. As proof, I offer Exhibit A above. These are just two of the clever coasters she made to celebrate my book. I chose the ones which feature cars because if you've read my book--or WHEN you read my book--you'll know cars play a significant role in the plot.
When I taught sophomore English, I dubbed it "the year of the car." That didn't mean all students got their own car that year, but most of them did get their drivers license. And I don't need to explain to you that in the US acquiring that official document is a rite of passage. To mark the occasion and to get to know my students better, I'd sometimes assign an essay in which they were to explain that if they were a car, what kind they would be. With the exception of one student (a very left-brained male who complained, "That's just dumb. People aren't cars.), they all seemed to get into the spirit of the assignment. And most understood it for what it was--a metaphor for their personality, not a request for them to turn into a Ford.
Now I'm asking my readers to do the same. No, you don't have to write an essay, and I'm surely not going to grade it! Been there, done that. But briefly tell me what kind of car best suits your personality. Remember, I'm not asking you what kind of car you drive, unless, of course, you just happen to drive a Maserati and that's the way you see yourself. But many of us don't drive our "inner car." For example, after years of hard work and saving, Bill and I recently rewarded ourselves with a late-model car with all the bells and whistles. But no way do I see myself as that sleek and luxurious vehicle. I see myself more as the sturdy, practical, dependable Camry I used to drive.
So join in the fun. Tell me, are you a Mini Cooper or a mini-van?
Posted by Dee Dee at 1:27 PM 8 comments:

A Different Kind of March Madness 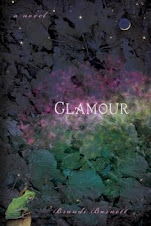 Isn't this an intriguing, mystical cover?
Doesn't it make you want to find out what the book is all about?
My writing group, the Inklings, is full of smart, creative people. Brandi Barnett is one of those, and she has written a delightful YA fantasy entitled Glamour. Today, she is celebrating March Madness by launching a book giveaway. To learn how you can win a free, autographed copy of Glamour visit her blog at www.brandibarnett.blogspot.com or click on the link in my profile. Even if you're not lucky enough to win her book, you can definitely pick up some interesting tidbits about child-rearing, crafts, writing, etc. And I promise if you look at her archives, you'll get a laugh or two. ﻿
Posted by Dee Dee at 8:45 AM 3 comments: