Jayber Crow and Contemplations on Community 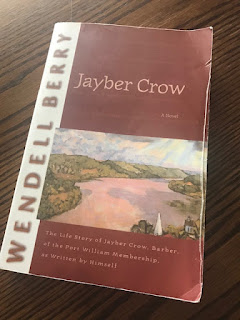 Jayber Crow by Wendell Berry was published in 2000, but it has just recently appeared on my reading radar, thanks to my daughter first and then a couple of friends. Fellow reader Cheryl, who shares with me a love for books with a “strong sense of community,” says Jayber Crow offers  much observation and wisdom on the subject. Since community is my focus word for 2020, I determined to give the book a read.

Jayber Crow, the eponymous barber of Port William, Kentucky, does indeed express a deep love and affection for his tiny community—the one that called to him as a lonely young man. Upon first arriving in Port William, he “… felt at home. There is more to this than I can explain. I just felt at home.” Years later, the time he has spent investing in the people, institutions, and well-being of the community have enabled him to verbalize his belongingness. “What I saw now was the community imperfect and irresolute but held together by the frayed and always fraying, incomplete and yet ever-holding bonds of the various sorts of affection…. It was a community always disappointed in itself, disappointing its members, always trying to contain its divisions and gentle its meanness, always failing and yet always preserving a sort of will toward goodwill. I knew that, in the midst of all the ignorance and error, this was a membership…”

Amid both the accepting and unreceptive residents of Port William, Jayber is able to find grace in and express gratitude for both the tragic and joyful events of his life. He has lived through the Great Depression as a foster child, an institutionalized orphan, and then a young man forced way too young to be on his own. While he could’ve very well allowed those hardships to define him, he draws on the strength and blessings of community to build a contented—though not fairy tale—existence for himself. With the help of generous friends, he fashions a life mindful of the grace that God through Christ has extended toward him. In return, he strives to extend generosity and grace toward others. “As for Troy Chatham, whose enemy I was for so many years … I have forgiven him too, even him…”

I read books for a variety of reasons: information, inspiration, insights, instruction. I also read for entertainment and escape.  Jayber Crow provided all of these. It taught me history—in particular about the years from 1917 through the 1970s in rural Kentucky and about life during the depression and world wars. I garnered insights on land conservation, human nature, and religion. I developed a greater appreciation for the natural world and, of course, community. Jayber’s yarns about the happenings of Port William and the hijinks of its inhabitants entertained me and elicited many LOL moments.

Mostly, though, this book inspired me. In this current time, when angst and uncertainty abound, Jayber Crow reminded me I have much to be thankful for, not the least of which are the communities of which I’m a part. I don’t live in a sleepy, closely connected hamlet like Port William, but I’m a part of several communities that offer me opportunities for learning, sharing, laughing, worshiping, growing. Communities that accept me and allow me to feel at home. Like Port William, they have their shortcomings, but that’s okay. I do, too. I wouldn’t feel at home amid perfection.

If you’re looking for encouragement during these difficult times (and don’t mind if a story meanders a bit), I highly recommend Jayber Crow.