On some blog post way back when, I coined the word "oblogation" and defined it as a blog post one feels obligated to write. Since this is Thanksgiving eve and since Facebook friends are posing the question, I feel an oblogation to write about some things for which I'm thankful.

#1  Plumbers - Yes, right at the top of my list are those everyday      heroes who daily prevent, ameliorate, or repair disasters somewhere in the country. This week started out with a busted outdoor water faucet, which resulted in some soggy indoor carpet. A call to Red Beard Plumber had the faucet fixed within three hours of discovering the problem. I call that a minor miracle, and even more of a miracle, the bill wasn't that bad!


#2  Good Neighbors - While the faucet was repaired within a few hours, the wet carpet was going to be another story. An appeal to neighbors produced two big fans which have the the carpet almost dry at this point. I'm very thankful to have lived in the same neighborhood for almost thirty years, surrounded by kind and helpful people.

#3. Walmart - I know, I know. I'm well aware of the fact that some people refer to the mega-merchant as "hellmart" and would rather shop in hell than place a toe into one of its cavernous stores. But I'm sorry. Sometimes Walmart just can't be beat for convenience and economy. This year my daughter and her family will be visiting her in-laws, which means a low-key Thanksgiving for Bill and me. I'd planned on grabbing a couple of to-go turkey dinners from nearby Cracker Barrel, but when I called today I learned they were completely out of Thanksgiving fare! I perused the list of restaurants open on Thanksgiving and while there were some, the prices ranged from $30 to $60 ... per person! I don't consider myself particularly cheap, but really, how can one person possibly eat $60 worth of turkey and dressing in one sitting? Determined not to repeat the Chinese restaurant fiasco from a few Thanksgivings ago, I set out to hunt down my own turkey (dinner). And where did I find it? Yep, good ol' Wallyworld. Turkey and all the fixings in one convenient box. (I'll let you know tomorrow how it tastes.)

#4.  Running Water - The busted faucet was no sooner solved than we discovered a leak in our yard irrigation system. A diagnosis from the repairman resulted in the water being shut off for several hours. Many absent-minded attempts to turn on the water reminded me that there are places in the world where people don't have the luxury of indoor plumbing and have to haul to haul their water long
distances by foot.


Yes, it has been a fun week. But despite the many inconveniences, I recognize that's exactly what they are--inconveniences. Not irreparable disasters, not financial calamities, not losses of property or life. Would I want to repeat this week? No. But I definitely look on it as one of those blessings in disguise. It made me stop to consider and appreciate all the everyday miracles I too often take for granted. And for that I'm truly thankful.

Writing for pleasure, profit, persuasion? Sure!

But writing for survival? Hmm... 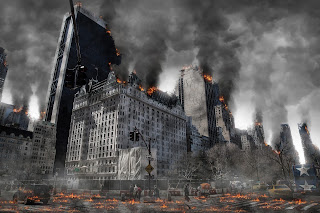 Check out my guest post on on the Southern Writers blog, Suite T.