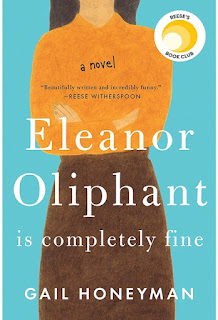 An eccentric loner, thirty-year-old Eleanor Oliphant deals with childhood abuse and trauma by adhering to a strict regimen of work, sensible eating, Wednesday night communications with her mother, and weekend vodka binges. Eleanor insists she is "perfectly fine," but when a carefully constructed plan of “trying new things, exploring boundaries” ends badly,  the realization that her life might not be all that “fine” leaves her teetering on the brink of disaster. While such a plot might sound abysmally depressing, author Gail Honeyman combines hilarious and heart-wrenching moments with such skill as to ensure readers will be laughing out loud and blinking away tears—sometimes simultaneously.

On the rare occasions Eleanor is thrust into social situations, her strategy for handling them is to ask herself, "What would a ferret do?" or "How would a salamander respond to this situation?" With such a plan, it is no wonder Eleanor is considered a bit odd. But while her observations on human behavior might have the reader chuckling, they also elicit the question: Just exactly who is the strange one here? For example:
—“I was in a fast-food restaurant for the first time in my adult life, an enormous and garish place….It was mystifyingly, inexplicably busy. I wondered why humans would willingly queue at a counter to request processed food, then carry it to a table which was not even set, and then eat it from the paper? Afterward, despite having paid for it, the customers themselves are responsible for clearing away the detritus. Very strange.”
—“The barman…had created strange, enormous holes in his earlobes by inserting little black plastic circles in order to push back the skin. For some reason, I was reminded of my shower curtain.”
—“…I’d worked out that social success is often built on pretending just a little. Popular people sometimes have to laugh at things they don’t find very funny, do things they don’t particularly want to, with people whose company they don’t particularly enjoy.”
See what I mean?

Amid such remarks are others hauntingly tragic. Chapter 26 contains what I consider one of the saddest passages of literature ever written: “I took one of my hands in the other, tried to imagine what it would feel like if it was another person’s hand holding mine. There’ve been times when I felt that I might die of loneliness…I physically ache for human contact. I truly feel that I might tumble to the ground and pass away if someone doesn’t hold me, touch me….The scalp massage at the hairdresser, the flu jab I had last winter—the only time I experience touch is from people whom I’m paying, and they’re almost always wearing disposable gloves at the time.”

And then there are the lines filled with hope: “All you hear these days is that everything’s going to hell in a handcart, how everybody’s a pedophile or a crook, and it’s not true. You forget that the world is full of ordinary decent people like yourselves, Good Samaritans who’ll stop and help a soul in need.”

In the manner of Olive Kitteridge and A Man Called Ove, Eleanor Oliphant is Completely Fine takes readers on a poignant journey, plunging them into the world of the lonely and depressed and marginalized but also introducing them to characters of incredible warmth and understanding. With sympathy and humor, it teaches us about the all-too-human tendency to judge before we know a person’s circumstances and about the tenacity of the human spirit to overcome adversity. Above all, it demonstrates the life-saving power that community brings.

Two Things:
A Caution - Several characters in this story provide proof of Eleanor’s statement, “Obscenity is the distinguishing hallmark of a sadly limited vocabulary.” If crass language offends you, you might want to pass on this novel. However, I sincerely hope you don’t. If you look beyond the language, you’ll find beautiful messages of compassion and hope.
A Confession - I didn’t read this book; I listened to it. Twice. It is narrated by Cathleen McCarron, whose delightful Scottish brogue and talent for interpreting characters’ voices greatly enhanced my enjoyment. Fans of audio books should find this format delightful.