In 2009, I visited the National WWII Museum in New Orleans. An unenthusiastic visitor at first, I quickly became captivated by the history which surrounded me. I think I learned more about WWII in that place than in all my history classes combined. I know I gained a greater appreciation for the men who served in it.﻿﻿ 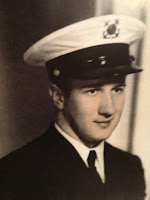 While wandering through the museum, I happened upon the U.S. Merchant Marines exhibit. It intrigued me because Joseph Fink, my dad, served as a Merchant Marine during the war. To be honest, I’d never given much thought to that period in my dad’s life. Yes, in our house there was a picture of him looking proud and handsome in his uniform. And I’d heard bits and pieces about his travels and had often perused his scrapbook collection of postcards gathered from all over the world. But like many veterans, he spoke very little about wartime experiences, so I never gave them much consideration...until that day in the museum, when I grew so proud.
All the information I learned about Merchant Marines is too extensive to include in this post, but if this time in history and this area of the service interests you, you can read more at American Merchant Marine at War. Below are a few fascinating facts from this site and from the museum site:
·        In WWII, it took from 7 to 15 tons of supplies to support ONE American soldier for one year.


·         One out of every twenty-six American mariners died while in service, the highest percentage of deaths suffered by any service branch during WWII.


·         On May 22, 1942, President Franklin Roosevelt proclaimed, “The American people have reason to be proud of the heroism and patriotism of the officers and seamen of their Victory fleet. During these dangerous days and nights on the sea lanes of the world, with danger lurking above, below, and on the surface, they do not falter in the performance of their duty. Hundreds of them render service far beyond the call of duty. It is gratifying that the Congress has recognized such heroism and authorized the bestowal of proper awards to these men of the sea, who are just as vital to our ultimate victory as the men in the armed forces.”


·         General McArthur stated, “I hold no branch in higher esteem than the Merchant Marine Services.”


·        Many argue that without merchant seamen’s valuable contribution, an Allied victory wouldn’t have happened. Sadly, however, Merchant Marines could not receive any benefits for their service until President Ronald Reagan signed a bill granting them veteran status in 1988.
In 1989, my dad received a form letter and a Certificate of Release or Discharge from Active Duty and an Honorable Discharge Certificate. That same letter informed him, “The enclosed documents establish your status as a veteran.” At that time, he was 68 years old—too old to take advantage of the GI Bill or a VA mortgage. He could have received VA medical benefits, but at that point he was on Medicare and a supplemental health plan and saw no reason to change. 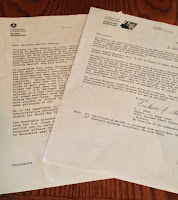 Daddy wasn’t a man to harbor regrets orresentments about the past, and I’m not writing this post to complain. But I am asking you to remember this often forgotten branch of service in your observance of this day. Their recognition as veterans in 1988 was long overdue. Joseph Fink and all Merchant Marines who served in WWII were veterans of that war from the day it ended, whether  two government documents “establish” it or not.

My heart-felt gratitude goes out to all veterans this Veterans Day!