"To Dance with the White Dog" -- a Southern Delight

Terry Kay’s To Dance with the White Dog was the Circle of Friends book selection for November. From the discussion, I gathered everyone enjoyed this book as much as they enjoyed Cheryl’s delectable chicken pot pie (recipe to come later) and Brenda’s decadent brownies. I know I did.


Kay is a southern writer, and the story is set in the south. I don’t know why I’m just now learning about him, as his first book was published in 1979, and he has written several books and won many awards. To Dance... was published in 1991 and made into a Hallmark movie in 1993. But somehow he managed to slip under my love-of-all-things-southern radar. Now that I’ve discovered him, I’ll be reading more of his works.


The Friends liked that Kay—at least in this book—imparts southern “charm” and not southern “crazy.” Not that we’re totally opposed to southern crazy, but once in a while it’s good to let the rest of the country know we’re not all down here eating fried butter on a stick or entering our toddlers in beauty pageants. And we liked it because it is a “sweet” story. It has conflicts and an engaging plot but without the violence, hatred, and angst that’s prevalent in a lot of literature.


I personally liked To Dance with the White Dog because it is a story about love—love for a spouse, love for children, love for parents, and, yes, love for a dog. And I think that last love is what made the story resonate strongly with me. In the protagonist’s relationship with his dog, I saw much of my own father’s situation. Over the past few years, my dad’s mental state has rapidly declined, and he bears little resemblance to the person he used to be. He is still a fairly easy-going, contented individual, but he remembers only snatches of his past. His children and grandchildren are strangers to him most of the time. His verbal communication skills are all but lost. Sandy, his mixed-breed German shepherd, is his constant companion. My mother and my sister take good care of him, but Sandy keeps him grounded in a world which must seem to grow increasingly confusing. She keeps him moving as he struggles to take her on walks. She sits patiently by his side for endless hours. And because a rub behind the ears and a responding lick on the hand communicate everything, no conversation is required,


Kay poignantly reflects his understanding of this man/dog bond in his book. He also addresses the challenges of growing old, the problems of dealing with an aging parent, the awkwardness of reversing the parent/child role. And he does it with respect, compassion, and humor. Even if you’re not a dog-lover (or a southerner), there is much to enjoy and contemplate in To Dance with the White Dog. 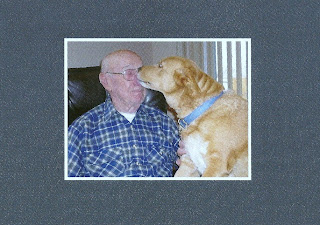 PS  My mother takes this relationship in stride. One time someone said to her, "Gladys, I think Joe thinks more of his dog than he does of you." Her reply: "Oh, I know he does. He doesn't kiss me goodnight and tell me what a pretty girl I am!"

Email ThisBlogThis!Share to TwitterShare to FacebookShare to Pinterest
Labels: Circle of Friends, elder care, Terry Kay, To Dance with the White Dog