Christmas, A Time for Sharing 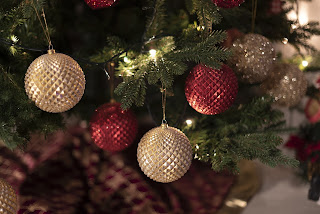 Christmas decorating is done inside and out, and the shopping and baking are currently under control. Finally I have time to post on my long-neglected blog.

For this post, I decided to do something I've never done in my blog--share a scene from one of my books. The idea came to me when I saw a Facebook post of people telling their favorite scenes from Christmas movies. In Christmases past, I've revealed my favorite Christmas story to be The Best Christmas Pageant Ever by Barbara Robinson. The scene of little Imogene Herdman crying over the manger scene moves me to tears every time I read it. But while this remains my very favorite Christmas scene from a book, I still think mine from Some Form of Grace is pretty good. So, I thought, why not share it?

To "set up the scene," here is a brief explanation. Recently released from prison, Gracene, a resident at Transformation Place,  is transitioning back into society. But she has a secret. Transformation Place is supposed to be for Christians, a concept Gracene is not too sold on. But she loves the people at Transformation Place, and they have provided her employment with a landscaper which she enjoys, and so she remains there. In late November, she and her foreman Tony are working on an off-season job putting up Christmas decorations.

“So how was your Thanksgiving?” Tony asked.

On the mild Monday following Thanksgiving, me and Tony were putting up Christmas decorations in someone’s—a rich someone’s—yard. For the past two weeks we’d wrapped about a million lights around every twig of the bare trees. Now we were assembling a nativity scene.

“How about yours?” I asked.

We worked for a while on an angel choir. I held stakes while Tony pounded them into the ground, and then we attached ten-foot angels to them.

“I understand that they’ll have music playing as people drive by,” Tony said.

I stretched and massaged my aching back. “Seems to me if people wanted to spread the Christmas message they’d spend their money on food for the homeless or toys for kids rather than waste it on fancy decorations.”

“Who knows? Maybe they do that, too.” Tony knelt and began assembling a manger. “As far as spreading the Christmas message, these folks have put up this nativity scene for the last five years. By Christmas Day, hundreds of people will have driven by it. Most of them will know the Christmas story, but not all. Maybe this display will start some conversations. Besides that—” he looked at me and winked—“if they didn’t pay to have these ‘fancy decorations’ put up, you and me might not be making extra cash.”

I didn’t want to admit he had a point. “Is it time for lunch?”

A breeze was picking up, so we sat in the cab of Tony’s truck and ate our sandwiches.  We never talked much when we ate, but as I looked out the windshield at that half-finished nativity scene, I couldn’t keep quiet.

If he thought this question was strange, he didn’t show it. “Almost every Sunday.”

“I’m Hispanic and have six kids. Which one do you think?”

I laughed. “Your kids excited about the holidays?”

The only sounds in the cab were me and Tony chomping our food.

“So you buy all that?” I said. The question sorta popped out before I knew it was coming.

“All those stories about Christmas?”

“You mean Santa and the elves and the North Pole?”

“No, I mean a baby and the wise men and the stable.”

He took another swig of coffee and screwed the lid on his thermos. “Yeah . . . yeah, I buy it. I mean, I don’t think it happened like the scenes on Christmas cards. But I believe there was a baby. And I believe there were signs and clues that showed it was a special baby—God’s Son.”

I let out a sigh. “It’s a lot to get your head around, isn’t it? A virgin birth. Angels singing.”

Tony stared out the windshield and rubbed his chin. “I guess it is. If you’re looking for scientific proof, Gracene, I can’t help you. But for me, there’s more reason to believe that God exists than that He doesn’t. And if I believe in a God powerful enough to create the universe and smart enough to design the human body, then it’s no problem to believe he could manage a virgin birth.” He nodded at the decorations. “Or an angel choir.” He packed up his leftovers and his thermos in his careful, organized way and opened his door. “Ultimately, it’s a matter of faith. And that’s a decision we all have to make for ourselves.”

For the rest of the afternoon, our conversation stuck in my mind. Tony hadn’t given a lot of facts to back up his explanation. But it made more sense than any I’d ever heard.

This past year I posted about my favorite songs and hymns, so I guess this would also be a good time to share my favorite Christmas song, "Mary Did You Know?" While I've heard some people respond to this title with "Of course, she knew," I still love its message of hope and its beautiful melody. And this performance by Kenny Rogers and Wynonna Judd remains my favorite rendition of it.

Unto You a Child is Born!"

-Gladys Herdman in The Best Christmas Pageant Ever