The Taming of the Screw

I don’t know if it’s a common occurrence or I'm just special, but ANY home repair or improvement project I’ve ever attempted has NEVER followed standard procedures. There is ALWAYS a complication that isn’t addressed in the easy-to-follow instructions. Given this pathetic history, I don’t know why I thought I could take down an old set of drapes and replace them with sheer panels. But in a moment of weakness—or delusion—I decided I was up to the task. I mean, what could be so hard about removing a few screws and pieces of curtain hardware and putting up a simple rod? Right?

Did I say a “few” screws? Those drapes were professionally installed, and I contend that had this house been flattened
by a tornado or earthquake, those drapes would’ve still been attached to the wall. I removed no fewer than twenty-eight screws, most of them with a three-inch screwdriver because anything larger wouldn’t fit in the space between the rods and the wall.

I took my time, constantly reminding myself there was no hurry and that calm persistence would eventually pay off. My progress was slow but going smoothly, and I was thinking of hosting my own HGTV show when I came to that #*&!@ twenty-eighth screw. The one in a very hard-to-reach space.The one with the stripped head.


I should insert here that the tools at my disposal are limited. Early on, Bill and I learned that we should never attempt home repairs or projects together if we intended to stay
married. We also determined attempting them as individuals

wasn’t such a good idea, either, so we’ve never invested in
anything more than your basic tools: screwdrivers (lots of screwdrivers), pliers, drill, duct tape, and toilet plunger. In any normal situation, those should get the job done. But, as previously stated, normal never occurs for me, and this project was no exception.

For hours, I tried every size and type of screwdriver we owned, succeeding only in mangling the head more. I ran next door to my neighbor to borrow a mini-hacksaw, thinking I could saw off the head. That resulted in scraping a huge chunk of plaster from the sheetrock. At that point, I was hours into this project, dripping with sweat and seriously considering knocking down the whole dang wall with a sledge hammer.

Had I been thinking straight, I would’ve given up and called the handyman we keep on speed dial. But I didn’t do that. I didn’t do it because this battle had become personal. Now it was Dee Dee versus the screw. It was Dee Dee against that one-and-a-half inch piece of metal that weighed a tenth of an ounce. I told myself, “ You is bigger, you is stronger, and you is smarter than that screw.”


I headed to Lowe’s in search of some magical solution. I explained my problem to a man in the tool section. Not a salesman, mind you, but a burly guy with lots of tattoos and a cart full of caulking tubes. He explained to me that I could drill a hole in the center of that screw and it would come right out. I was skeptical, but who was I to argue with a man who knew how to caulk?

Back at home, I dusted off our forty-something-year-old drill and proceeded to attack the screw head. It was slow going—probably because the drill bit was also forty years old. I gave up on that tactic after seeing no sign of progress. But I did not give up on my project.

I stood on my step stool and studied that screw, determined more than ever it would not defeat me. That was when another idea came to me. I grabbed the hacksaw, but this time instead of attempting to saw off the head, I slid the blade back and forth across the top of it, deepening the groove. I measured the depth with my thumbnail and realized I was making progress. I sawed some more. Before long I was able to fit the edge of the slot screwdriver into the wedge. I pressed hard and twisted and … the screw turned! Only a millionth of an inch, but that was enough to encourage my flagging spirit. Again I pressed hard and gave the screwdriver another twist. The screw turned a little more. With new found hope and energy, I continued: press, twist, press, twist … and with one final twist, the screw released its death grip on the wall. Victory has never tasted so sweet.

As I was writing this post, UPS delivered the new curtain rod to my front door. We’ll see if this one goes up easier than the old one came down. Given my history, I’m betting it won’t.

The rest of the story... 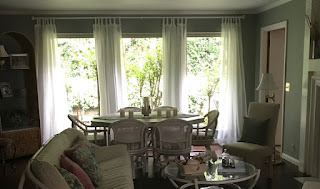 To my surprise and delight, the new rod and sheers went up with relatively few problems and with a total of six screws. So to borrow another title from The Bard--All's Well That Ends Well!