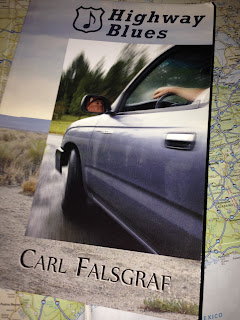 At fifty-five, Carl Falsgraf chucked his successful, well-paying career and set out on a forty-nine-day, round-trip journey from Eugene, Oregon, to Portland, Maine. He planned to use this time to unwind, re-charge, and reflect on what to do with the remainder of his life. Along the way he recorded his reflections and revelations, which he later shared in his travel memoir Highway Blues. A musician and songwriter, he also composed some new songs as he traveled. And—in an activity that especially interested me—he tried his hand at busking.
As I type this post, I’m glad to see that busk is immediately underlined with a red squiggle. Spellchecker is as unfamiliar with the term as I was. But dictionary.com ensures me it is indeed a word and means “to entertain by dancing, singing, or reciting on the street or in a public place.” The web site further informs me it is a chiefly British term, and a YouTube search reveals that, British or not, it is a thriving activity the U.S.
Falsgraf describes busking as “the most primal, challenging, and rewarding mode of musical experience.” The busker puts himself out there without the benefit of advance people, publicists, promoters, and all manner of fancy sound equipment. It’s just him, his raw performance, and his voluntary audience. Feedback is immediate: If people don’t like the performance, they walk away.
While busking can be nerve-racking, rewards do exist. Most often they are in the form of busy passers-by who pause to listen and indicate their pleasure by smiling and maybe nodding along to the music. If they are especially appreciative, these transitory fans might toss some coins into a jar or instrument case, but don’t count on those tips to pay the bills.
As I read Falsgraf’s explanation of the experience, it struck me that busking and blogging have much in common. In fact, I’ll venture to say that blogging is to the writer what busking is to the musician. Especially the way I do it. While there are the professional bloggers who garner huge followings and rake in mega-bucks, a glance at my blog will quickly reveal its amateur status: not a lot of money invested, not a lot of hours spent in SEO searches, not a lot of advertising and/or promotional schemes. I do have the opportunity to edit and revise before casting out my writing “pearls,” but my posts are raw in that no professional editor or even trusted writer friend has tweaked them. As for feedback, the stats quickly inform me how well received my efforts are.
Certainly, there are no financial rewards—not even a few coins tossed my way. But, as with busking, rewards can take other forms. There is the opportunity to air my thoughts and observations (of which I have many) without the pressure of meeting a quota or deadline. I have the freedom to choose my topics “as the spirit moves me.” I get the pleasure of feedback in the forms of comments and “likes” and “shares” and in the discovery I’ve added another follower. And there is always the unexpected bonus of someone complimenting you on a post and you had no idea they even read your blog.
It took me years to arrive at this conclusion, but I consider writing to be like any other talent. And just as there are all types of forums in which other talents can be shared, blogging provides one in which both the writing pros and the “buskers” can publicly perform.