On December 14, the acting community lost a gifted member in the person of Peter O’Toole. In the days following his death, many people wrote at length about him and his incomparable talent and accomplishments. But the article that most resonated with me was a snippet which appeared in the Notable & Quotable section of The Wall Street Journal. In it, O’Toole was quoted from an interview he did in December, 2008, on TCM Word Of Mouth.

"Many years ago I sent an old, beloved jacket to a cleaner, the Sycamore Cleaners. It was a leather jacket covered in Guiness and blood and marmalade, one of those jobs...and it came back with a little note pinned to it, and on the note it said, 'It distresses us to return work which is not perfect.' So that will do for me. That can go on my tombstone."
In the weeks leading up to Christmas, I noticed many posts and re-posts on Facebook or  blogs concerning the “true meaning of Christmas.” Among the messages were those actions and sentiments we most often associate with this time of year: deeds of great kindness; declarations and demonstrations of love for friends and family; extreme generosity to those in need.
Those expressions are indeed heartwarming and inspiring and should be shared, especially during a season when we desire to focus on what is best in mankind. But as I read that quote, I realized that even the best of mankind will never be perfect as long as we are on this earth. None of us will exit this life with a perfect body. Diseases, injuries, or old age will ravage our physical forms. Neither will we leave with a perfect record. No matter how hard we try, hurtful words, unkind acts, selfishness, and neglect will earn us a “Needs Improvement” on our earthly report cards. But unlike the conscientious folks at the Sycamore Cleaners, we needn’t be distressed. God knew humans would never be able to perfect their lives on Earth, so approximately 2000 years ago, He came to us in the form of a baby. That baby showed us what perfection is. And thirty-three years later, that baby made the supreme sacrifice so that we can return to our Maker as a perfect work.
For me, that’s the true meaning of Christmas. 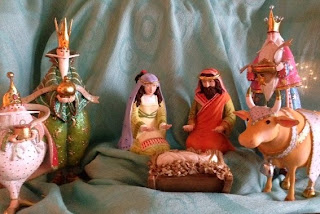 Wishing You Peace, Love, and Happiness this Christmas and in the New Year!
Posted by Dee Dee at 3:12 PM